This was the point where I made the biggest - in fact the only real - deviation from the planned route. The obvious way from Griesalp to Kandersteg is via the pass known as the Hohturli which is a long day covering about 15km or almost 10 miles with an initial climb of 4500 feet from Griesalp. There is a signed path all the way and the route is considered slightly harder than the Sefinenfurke reaching an altitude of 2778m after a steeper ascent than the previous day's. I would still recommend this as the better way being the most direct line towards Kandersteg from where we will cross the Bernese Oberland algthough building in a rest day at Griesalp would avoid 2 long days in succession.

The route described here and in A Long Walk in the Alps was something of an adventure being completely off the beaten track and not clearly marked though technically it was much easier than the high alpine passes. It would make a good alternative in bad weather as it did here when the weather was so "good" that it was only suitable for lying in the shade in close proximity to a cold drink.

An over enthusiastic sun was threatening to roast the valleys to over 32 degrees (90 F) again so not fancying the long steep climb to the roof of the Alps, my day began with the morning post bus to Kiental Village and another to Ramslauen which is normally accessible by gondola. My walk took me to Frutigen where there is a regular train service to Kandersteg. 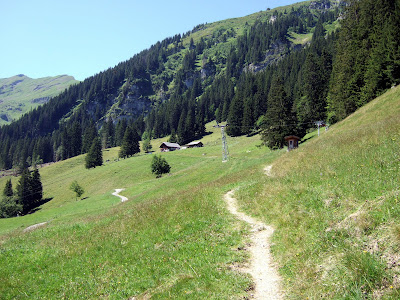 An easy and pleasant trail leaves Ramslauen above the Kiental amnd journeys through more idyllic meadows en route to Bachwald and Frutigen. 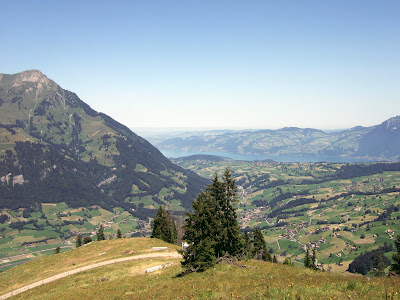 Right on the edge of the mountains here - the view towards Thunersee from the little used path 1000m above the Kandertal just after the farm known as Furggi. This was where I stopped heading west and turned south. 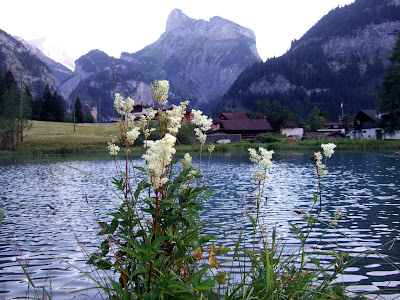 The tranquil lake behind the Hotel des Alpes where I stayed in Kandersteg. The hotel has a friendly and welcoming owner and is situated just south of Kandersteg centre on the way to the Sunnbuel cable car.
Back to day 3 >>> Murren to Griesalp
On to day 5 >>> Kandersteg to Oberems
Posted by Pete Buckley at 12:19