A Balcony on Mont Blanc - Hiking to the Brevent

We left the gondola station at Planpraz and the Tour du Mont Blanc/Grand Balcon trail to the Col du Brevent and headed up a steep track that more followed the route of the gondola. After passing through a rocky gateway, the summit of the Brevent appeared ahead looking as inaccessible as it does 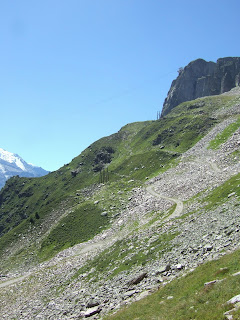 from Chamonix and we left the track to join a path climbing the steep slopes to the right. Below and opposite were steadily expanding views of the Chamonix Valley and the surrounding mountains topped by the vast white bulk of Mont Blanc.

As we gained height the path skirted around the cliffs; always avoiding difficulties and leading steadily towards where the summit gondola station perched on the edge of the abyss a mile above the town of Chamonix which was spread out below us like a map. As the final sheer wall was approached, the path headed back up to the right and through a stony hollow before gaining the ridge without difficulty and rejoining the wider path from the Col du Brevent. That was the way back. On the far side of the ridge is the wild and rugged terrain of the Aiguilles Rouges which is a nature reserve containing some wonderful hiking country while our route now followed the ridge beside a few snow patches on up to the summit which is just behind the summit station. 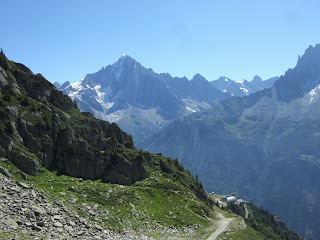 I have climbed the Brevent several times - usually from Planpraz - though this time with my eldest son Josh who has accompanied me on several outings - was the first time the view had been this clear. Most people journey here by gondola - the Telepherique du Brevent - for these views and they are worth every euro you pay for the ticket but the walk from Planpraz is not long and climbs only around 550m with the option of getting a ride down. 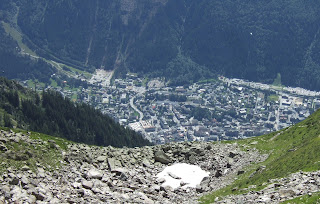 peaks whose names are synonymous with mountaineering in Chamonix; the Aiguille du Chardonnet and Argentiere along with the Verte, the Dru and the Midi all rose sublimely into the alpine summer sky. The rough landscape of the Aiguilles Rouges north of here provides a contrast and leads the eye to Mont Buet while down valley and beyond the limestone plateau of the Desert de Plate, the Chaine des Aravis was outlined against the summer haze of the distant lowlands.

The walk climbs from Planpraz at 2000m or 6560ft to Le Brevent at 2525m - about 8280ft - and has no difficulties being on a good path all the way. The mountain rises north of Chamonix on the opposite side of the valley to Mont Blanc and is 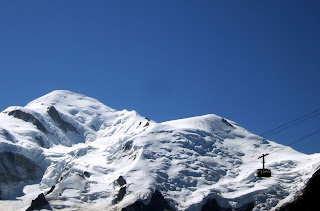 easily recognisable from town by the gondola station perched on the edge of the summit. A good path climbs through the forest from Chamonix though starting at just over 1000m means an ascent of 1500m which is a different proposition than going from Planpraz. We actually walked down that way to finish near the lower gondola station but a ride up that 1000 metres makes for a much easier walk... 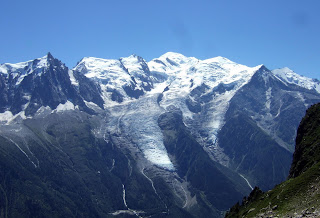 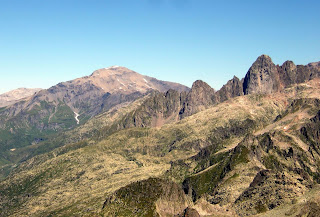 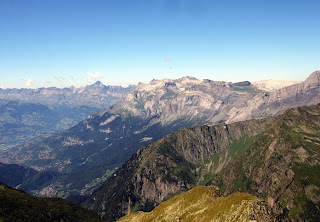