One of the more popular hiking routes from the Chamonix Valley is the walk to the Albert Premier Hut or Refuge Albert Premier - high above the alpine hamlet of Le Tour at the head of the valley. The hut itself is situated at an altitude of 2702 metres overlooking the ice seracs and crevasses of the Glacier du Tour but despite the high altitude and spectacular position it is a fairly easy walk along a good path. 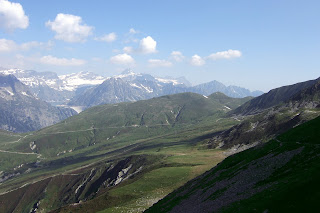 You can start the walk in Le Tour but it's a long day from there - most hikers to the Albert Premier take the gondola to Col du Balme up by the Swiss Frontier from where a good path leads in roughly a southerly direction at first to gradually ascend around the hillsides by an easy route. The first picture shows the col de Balme area from the early part of the route.

After perhaps a mile the path passes the Lac du Charamillon which is just above on the left and is a wonderully peaceful spot - this track can be busy during fine weather. A little further and the route tops the ridge ahead and turns to the left where spectacular views open up ahead of Mont Blanc and the vista down the Val du Chamonix. 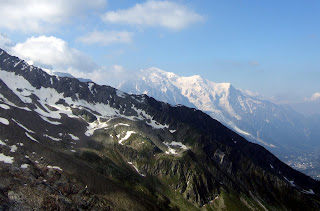 There follows a short rocky section protected by a rope handrail - no difficulty - and the route heads on towards the Glacier du Tour over boulder strewn hillsides. At the glacier the path bears left up the steep moraine and meets the direct route from Le Tour which comes up from the right. Now a steady climb of the moraine takes us directly up to the hut which can be seen above. The last part is often snow covered but you don't go onto the glacier itself which is below on the right.

The views from the Albert Premier are stunning with the Glacier du Tour as a centrepiece. The high peak on its far side is the Aiguille du Chardonnet (3824m) while the rocky summit beyond the refuge is the Aiguille du Tour (3540m) - a popular climb from here. This ascent is not difficult but you need ropes as it goes onto the glacier where there is a crevasse danger. 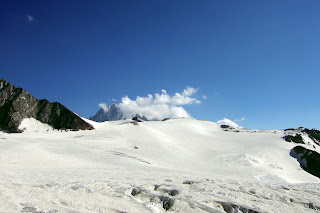 The panorama across the valley is just as awesome with the jagged peaks of the Aiguilles Rouges rising from the wooded valley and the usually snowy peak of Mont Buet (3099m) topping the Emosson Peaks - a view which has accompanied us most of the way from Col du Balme. 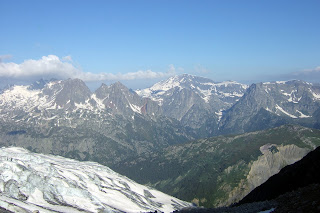 gondola down - the path straight down does go to Le Tour but it's steep, rough and generally not as easy as the ascent route was. It is about 4.5km or a bit under 3 miles from the gondola to the refuge and the path climbs about 600m or 2000 feet in getting there. From Le Tour it's twice the climb.
Posted by Pete Buckley at 11:19