Grindelwald to Zermatt - Walking From the Eiger to the Matterhorn

During the summer of 2007 I set out to walk through the Swiss Alps from Grindelwald beneath the North Face of the Eiger to Zermatt at the foot of the Matterhorn. It is a journey that certainly lived up to expectations though I did deviate somewhat from the planned route on a couple of occasions. My experiences on the walk itself can be read about in detail in A Long Walk in the Alps which was published the following year and the route would appeal to any who are looking to do a long distance Alpine trek without the crowds you can meet on the better known routes such as the Haute Route and the Tour du Mont Blanc. It is not too far from the tourist trail though and accommodation is plentiful along the way.

Why did I pick Grindelwald to Zermatt then? Well - they were both places that I had visited several times previously and they both stand beneath mountain peaks of World renown surrounded by some of the most spectacular scenery in Europe. It was the idea of linking these Alpine regions and the 2 mountains - the Eiger and the Matterhorn - that really inspired the route. A more accomplished climber would climb the peaks but as I would be just as likely to fall off one of them I decided to begin with the Eiger trail and finish with the Matterhorn Trail - the 2 walkers paths associated with them.

This post is a photo diary of the route - the one actually followed as opposed to the one I should have followed - but I have added information on the intended route where they differ. The walk took me eight days to Zermatt with another day to walk the Matterhorn Trail (which you can do in an afternoon} though as the way is not set in stone like many of the more popular treks, there is plenty of scope to vary the route according to weather conditions or personal preferences.

Thanks to everyone who bought A Long Walk in the Alps - I hope you enjoyed it. I certainly enjoyed doing the route though some parts were hard work because of the weather.

The full story is available for download or free preview in both the US and UK Kindle stores while the photo diary of Grindelwald to Zermatt follows here - navigation is at the end of each post. For more e-reader formats please visit Smashwords.

Day One: Grindelwald to Wengen via the Eiger Trail 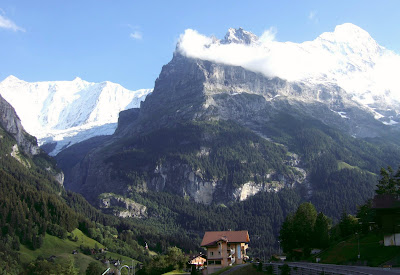 Walking down the road from the Hotel Lauberhorn towards Grindelwald one is greeted with views such as this - the Fiescherhorn (4049m) on the left and the Eiger (3970m) completely dominate this valley. 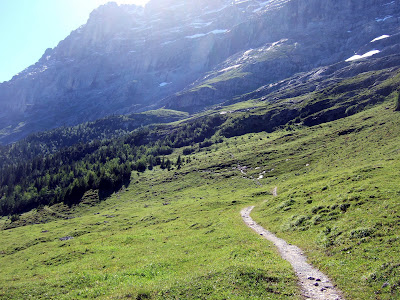 The Eiger Trail footpath frpm Alpiglen (1616m) begins over a pleasant meadow with the immense crags of the North Face looming overhead. The route heads through the trees ahead before doubling back to the right below the face. 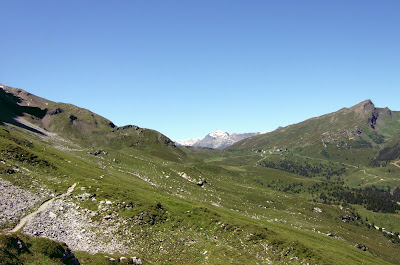 Higher up the trail crosses some extremely pleasant open country which is unseen from below. The snow capped peak above the saddle is the Schilthorn (2970m). 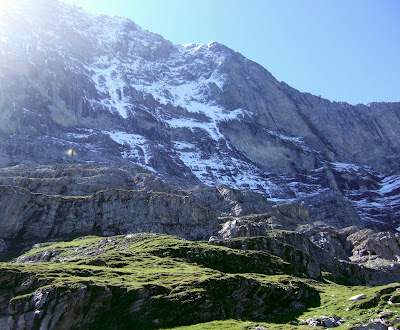 Above on the left the Eiger makes its prescence felt. The North Face is 1800m or 5900 feet of near vertical limestone rising to the summit of the Eiger. 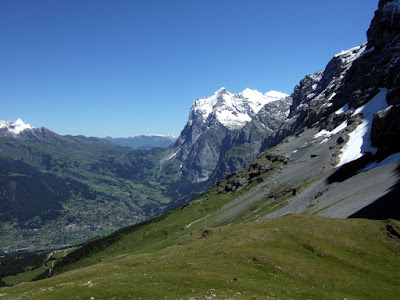 Nearing the top of the Eiger Trail route the view back is truly spectacular with Grindelwald far down to the left and the Grosse Scheidegg pass beyond. The peaks are the Schwarzhorn (2927m) and the Wetterhorn (3692m) 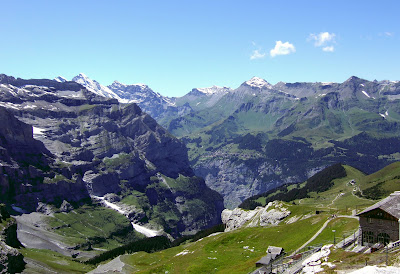 The view over the far side isn't bad either! A fine lunch spot where I was accompanied by a dog (not pictured) taking shelter from the sun. The building below is the Eigergletscher station of the Jungfrau Railway (2320m)while across the Lauterbrunnen valley which is a vertical mile below, Murren - next day's destination - can just be made out below the prominent peak of the Schilthorn (snow - just right of centre) while the obvious col to its left is the Sefinenfurke pass where we leave the Jungfrau Region. 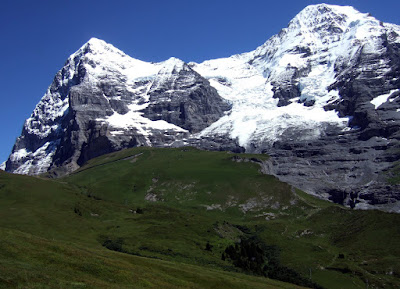 The Eiger (3970m) and the Monch (4099m) from the easy path down past Wengernalp (1874m) which is a good place to stop for a drink or something to eat. Here you will encounter many tourists who have not just hiked up the Eiger Trail but have instead simply got off the train at Kleine Scheidegg and walked down. Never mind - I saw a golden eagle as well! 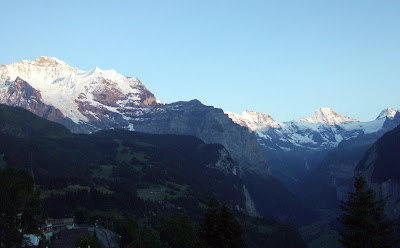 An hotel balcony, a beer and a view like this - cool! Evening alpenglow on the Jungfrau (4158m) from wengen while below is the Lauterbrunnen valley with the Breithorn at its head.

This section has well marked trails all the way with a total distance from Alpiglen to Wengen of 14km (9 miles) with just over 700m (2300ft) of ascent and 1050m (3400ft) of descent. Alpiglen is a request stop on the Jungfrau Railway. Walking from Grindelwald would make this a long day carrying a backpack.
Day 2 >>> Wengen to Murren (mostly by train)
Posted by Pete Buckley at 08:28