The most direct route from Randa to Zermatt would be to continue on the valley paths which would make for a pleasant and easy walk but though I followed these from Randa to Tasch - the next village going towards Zermatt - I took a steep path up through the woods east of Tasch (the one south of the Taschbach stream) towards Taschalp which is also known as Ottavan. When the wide easy path of the Europaweg is reached about 700m above Tasch, turn south (right) towards Sunegga and Zermatt instead of continuing to Taschalp which is still about a kilometre in the other direction.

If you have followed the trail north of the Taschbach gorge then you will pass Taschalp where refreshments are available. Either way this is one of the best days of the route with most of the climbing done early leaving the ever improving views to be enjoyed for little effort. If you want more effort then walk the full Europaweg from Gasenried (postbus from st Niklaus) instead of going to Randa. That way is much harder than this one which is a relatively easy walk of about 16km or 10 miles. 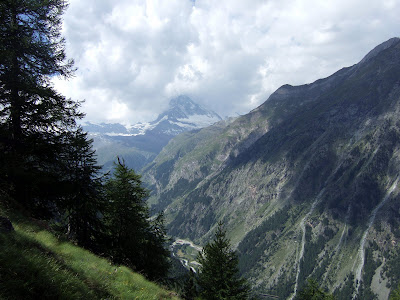 A first view (almost) of the Matterhorn (4478m) from a section of the Europaweg trail above Tasch. 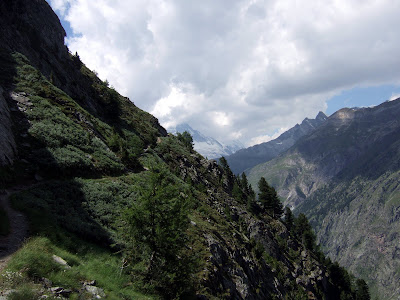 This section of the Europaweg is a fascinating trail traversing the steep slopes above the Mattertal. On this trek we effectively do the last third or so of the Europaweg which on its own is a two day hike. The last section is interesting but fairly easy. 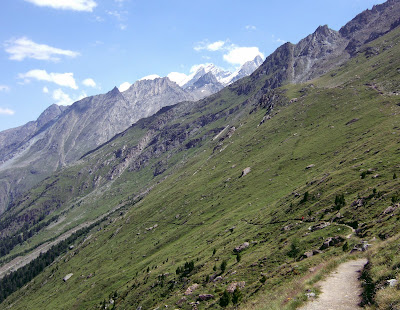 Looking back to the Mischabel peaks. The central summit of the Dom (4545m) is the highest mountain entirely within Switzerland - Monte Rosa being on the Italian frontier. 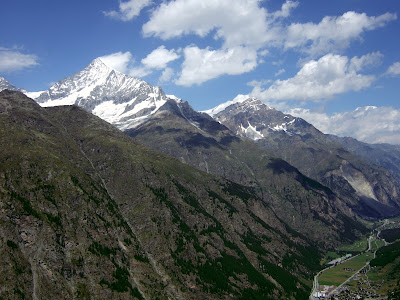 Across the valley rises the Weisshorn (4505m) one of the most impressive of the peaks here if not so famous as the Matterhorn. 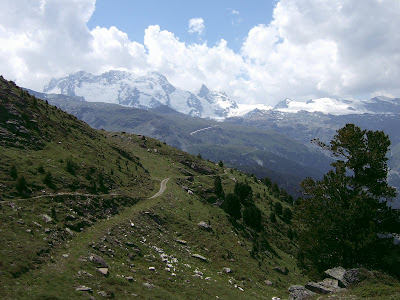 The Breithorn and Klein Matterhorn from the latter stages of the Europaweg near Tufteren. For an account of hiking up the Breithorn please see this post 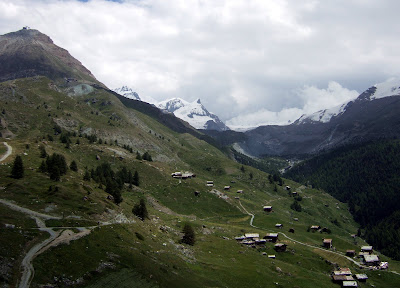 The meadows of Findeln beneath the Rothorn (3103m) with the cable car building visible on the summit. There is a shorter way to Zermatt direct from Tufteren but this is surely the finest approach. 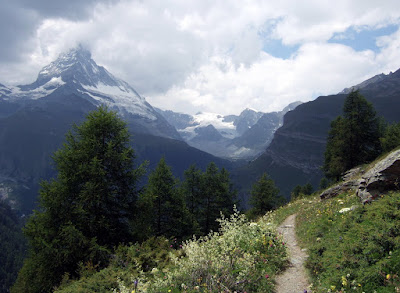 The path descends now in its final approach to Zermatt while the Matterhorn towers overhead. 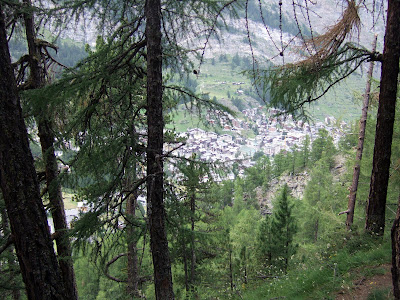 The rooftops of Zermatt appear through the trees. We are almost there. 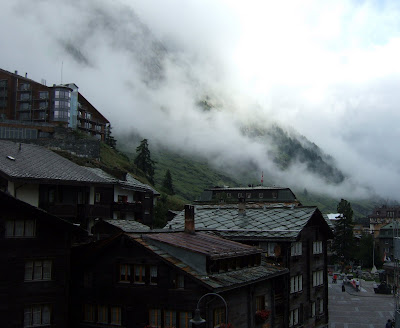 The view from my hotel balcony. I arrived just before the weather came in.


The last day >>> The Matterhorn Trail
Posted by Pete Buckley at 05:30