At an impressive 3415m or 11204ft the Oberrothorn is the highest peak in the Swiss Alps with a marked hiking trail to its summit. Apart from altitude there is no difficulty in the ascent - the slightly lower Mettelhorn across the valley being the more challenging - and it may be climbed from any of the gondola stations on the lift system known as the Rothorn Paradise which leaves Sunegga. You could even make the ascent from Zermatt but it's a long way up from there - over 6000 feet or 1800m.

Do not do as the author did and do this on the first day in Zermatt - much dizziness above 3000m - a couple of days in these high hills is a good idea before venturing to this height. The route between the two "Rothorns" is known locally as the Weg zur Freiheit or Freedom Path but don't take my word on that as I can't speak German. The pictures are from early July 2006 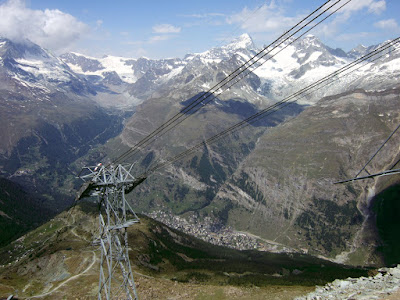 Looking down to Zermatt from the Rothorn gondola station which is on the Unterrothorn peak at 3101m. Starting from here is the easiest way to the top of the Oberrothorn but for a longer walk set out from Blauherd (middle station on gondola) or Sunnegga (funicular from Zermatt) where easy and well signed paths lead up to the col between the 2 peaks. 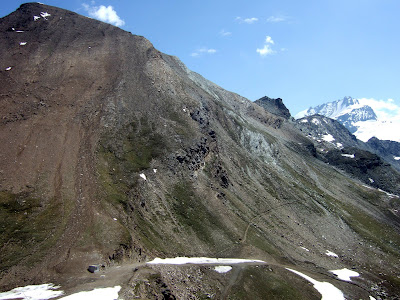 The Oberrothorn from the Unterrothorn. The way leads down to the col at the bottom of the picture and follows the path visible around the lower right side of the peak. 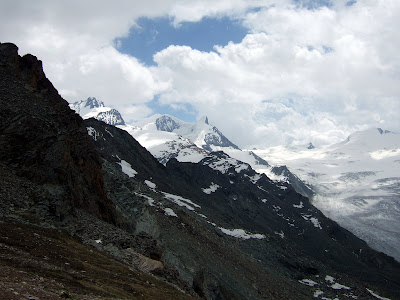 The path ascends without difficulty from the col around to the far side of the peak where it zig zags up a steep shale slope. The view from here is of the Rimpfischhorn (the sharp central peak) and the Strahlhorn on the right. Both are Alpine 4000 Metre Peaks and the upper part of the Saastal lies beyond them. 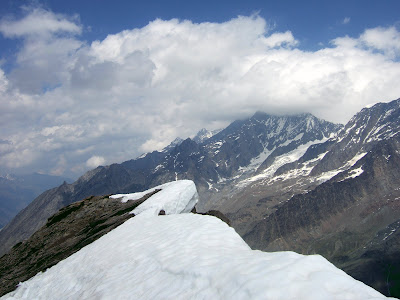 The far side of the Oberrothorn is not so easy and drops away precipitously. Care is needed if there are cornices but the way here is easy over snow and shale. Those who are not acclimatized you will notice the lack of air on the ascent! 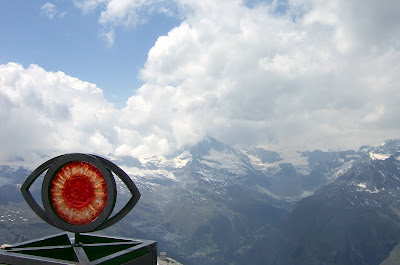 The curious monument on the Oberrothorn summit at 3415m. The Matterhorn is supposed to be in view straight ahead here but the weather was not co-operating while the "eye" monument marks the end of the Weg Zur Freiheit. The way down is a simple retracing of one's steps back to the col between the 2 peaks. From there take the path that heads left down the slope instead of returning to the Unterrothorn. It soon widens and follows a high valley downwards through alpine meadows to Blauherd at about 2500m. Many marmots inhabit this section of the route.


Pete Buckley Feb 2011
For the full account of this trip please see my Oberrothorn page on Travellerspoint
Posted by Pete Buckley at 10:32