The Schilthorn from Murren

At 2970m or 9745ft the Schilthorn is one of the highest walkers' peaks in the Jungfrau Region. The summit is attainable by cable car which gives an easy ride down if legs or the weather deem it necessary yet the walk from Murren or Almendhubel provides the walker with an introduction to the high mountains and a route which well shows the transition from lush forests to the harsh alpine world at nearly 10 000 feet. The route too is largely easy and safe. This photo account is from July 2007 when I experienced less than perfect weather with snow on the route yet nowhere did it seem dangerous. From Allmendhubel the route is just over 6km (4 miles) one way with 1060m (3480ft) of ascent. The full account of this trip is available on my walking in the alps archive. 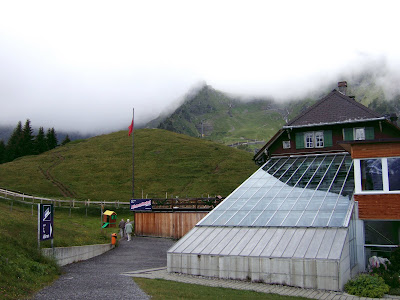 Allmendhubel at 1912m is a short ride on the funicular from Murren and a good start point for this walk. Add 270m of ascent if starting in Murren. The route is well waymarked for Schilthorn and/or Schilthorn Hut. 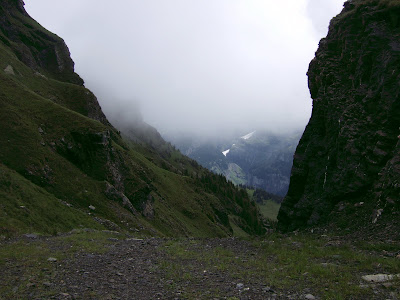 The first part of the route is a steep track which leaves the steep slopes vis this gully (not difficult) to emerge on more open and gently sloping pastures below the Schilthorn Hut (2432m) where refreshments are available. The path to the hut branches off to the left a little further on. 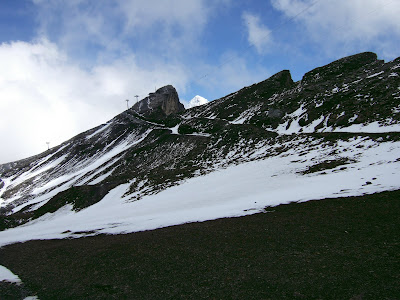 The route climbs steadily to where the main trail also branches left - as can be seen - to cross the mountainside leading to the cable car station of Birg at 2677m which is on the small peak where the towers are. We don't want to go that way though unless you've had enough or the weather is bad - instead there is a signpost at the top of a slope which directs towards the Schilthorn and the path carries on up the slope ahead. 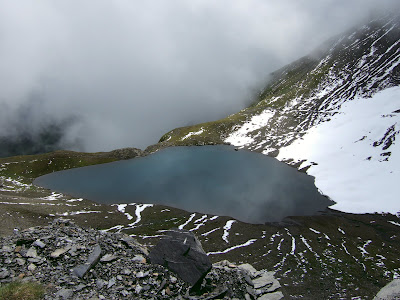 Soon the mountain tarn of Grauseeli appears in a fine setting in a hollow in the mountains down to the left as a wide track is followed towards the Schilthorn which rises ahead. 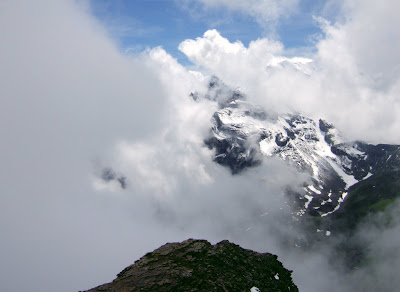 The trail becomes a rough path and climbs the stony slopes ahead generally bearing round to the left to ascend a steep ridge to a subsidiary top high above the valley. The way up involves short easy scrambles with a few chains for protection though even in the snow it was not difficult. The views are wonderful - when you can see them! 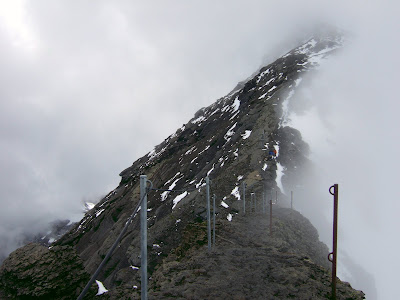 The exciting ridge crossing to the main peak with 2 walkers descending it. This was fun rather than scary as there are cables and metal posts for protection. It is fairly narrow but not long though the view of the valley 7000 feet down on the left adds drama. The summit is (sometimes) visible close by in front. 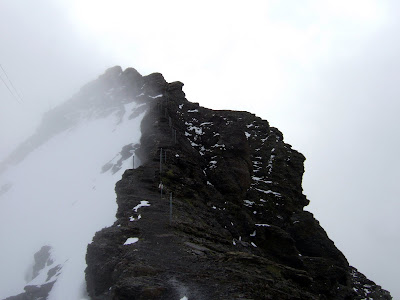 A last steep ridge leads to the summit - again with chains and stone steps for part of the way - it's easier than it looks here though. 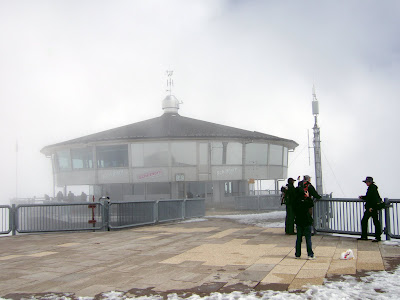 The summit at 2970m where you will enjoy a sense of great superiority over all those who have come up on the cable car. The view from here can extend from the Schwarzwald (Black Forest) in Germany to the Mont Blanc Range - but not every day! 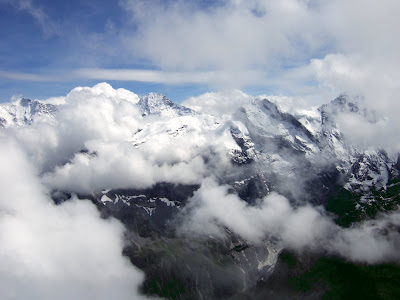