The Hohtalligrat is a short but exciting walkers' route from the Gornergrat station to the minor peak of the Hohtalli at 3286m or 10781 feet, which is crowned by a cable car station visible from below. This lift is to transport skiers and does not operate in the summer season so the way to it is along an airy ridge of about 2km in each direction.

The Gornergrat Mountain Railway is a popular excursion from Zermatt and journeys at a leisurely pace from the pinewoods of the Mattertal through the meadows of Riffelberg to the harsh high alpine world above 3000m. The views from the Hohtalli surpass even that World Renowned panorama from the Gornergrat itself and as most of the tourists do not stray far from the safety of the train station they are to be enjoyed in relative peace. The Matterhorn and the Dent Blanche across the valley are especially memorable while this must be the best vantage point from which to view the arctic landscape of Monte Rosa and Liskamm.

As for the route, it involves only a short ascent (little more than 200m) with about 4km of walking for the return journey from Gornergrat but bear in mind that it is a high altitude trail. My previous visit here - also in July - encountered deep snow which can turn the walk into a minor expedition! The way is rough and involves use of the hands in a few places but no hard scrambling is encountered and even the author did not require the services of a helicopter to get down. 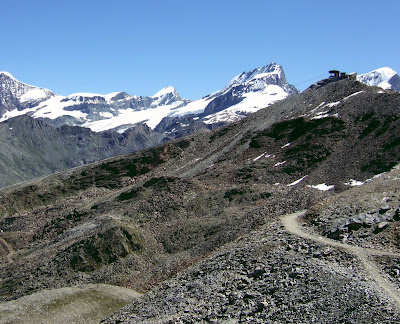 After leaving the station (3090m) and skirting the Gornergrat Kulm Hotel and the silver dome of the observatory on the left, the path leaves the buildings and heads towards the Hohtalli which is seen ahead. The high summit just to its left is the Rimpfischhorn (4199m). 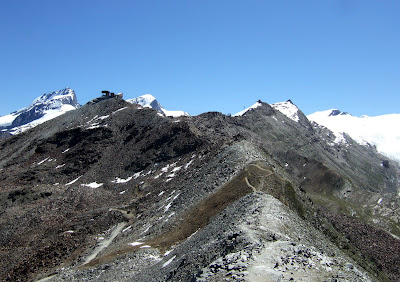 The route soon ascends to the right to easily gain the ridge of the Hohtalligrat and in a dip after this point a path leads off down to the right. This leads to the Monte Rosa Hut but our route is straight on along a track which gets fainter than this one here but is always easy to follow. 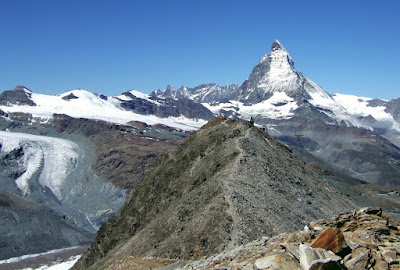 Looking back to the Gornergrat from the early part of the route with the Matterhorn beyond. 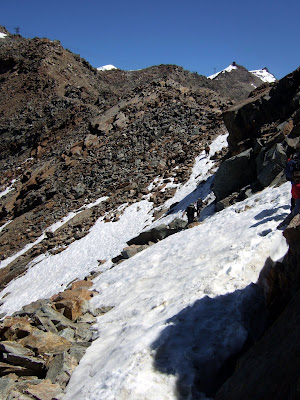 The trail crosses patches of snow as it leaves the ridge crest on its northern side. This one needed some care but there was a fixed rope up near the rocks to the right. 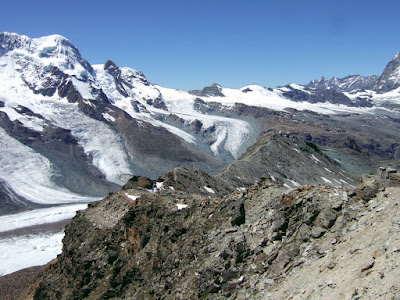 Looking back down the latter part of the ridge with the Breithorn and Klein Matterhorn visible on the left of the picture. After this point the path crosses again to the northern side and a rough stony ascent leads to the top. 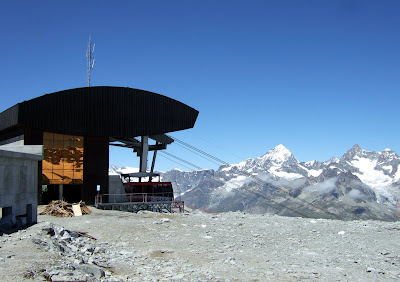 The cable car station on the Hohtalli at 3286m with the Dent Blanche and Obergabelhorn beyond. There were no tourists - the lift only operates in the ski season. The last part to it is again steep and rough but poses no difficulty. 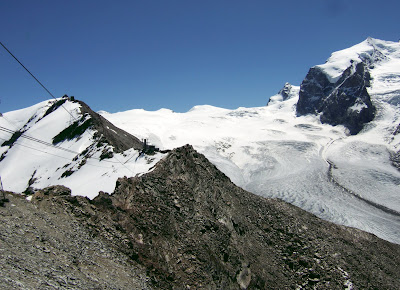 Further along the ridge is the Stockhorn but the way beyond here stops being just a walk! The snowy horizon is the Italian frontier with Monte Rosa on the right. 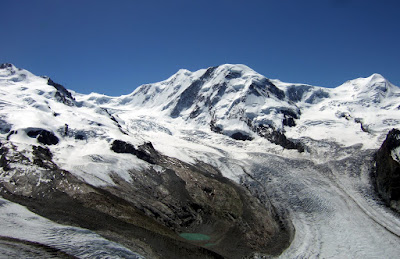 Liskamm (4479m) and the Grenz Glacier. The Monte rosa Hut is just above the small tarn at the bottom of the picture. 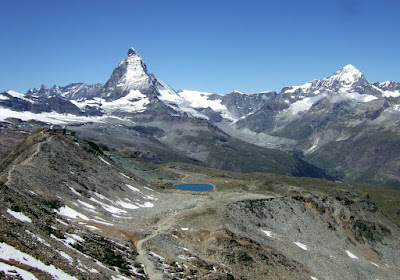 The Matterhorn (4478m) and the Dent Blanche (4357m) are viewed to perfection from here. The Gornergrat Observatory is visible on the left and the way back is to retrace one's steps.
Pete Buckley Jan 2010
Posted by Pete Buckley at 07:32