This route which visits the Weissmies Hut and the newly inaugurated high altitude hiking trail the Hohsaas Rundweg, begins at Kreuzboden which is reached by cable car from saas Grund in the Saastal. While the route could (theoretically but not by the author) be done from the valley without using the gondola it would be excessively long. As it is there are about 930m (3050ft) of ascent and the distance is not excessive. Paths are well marked, often steep, but never difficult and the gondola gives an easy way down if needed.

The views of the peaks of Saas Fee and the close up prospect of the Trift Glacier are the highlights of the walk with the high alpine zone being reached with surprising ease but don't try it straight from the valley on your first day in the Alps - the altitude of over 3300m is cosiderable. There are more walking routes on my homepage. 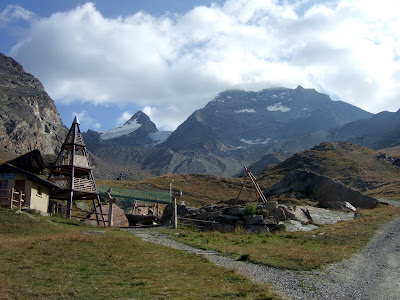 Kreuzboden is situated at 2400m in fantastic walkers' country in a hollow in the mountains high above the Saastal. This route sets off from here towards the peaks of the Fletschhorn and the Lagginhorn. The route is easy and well marked. 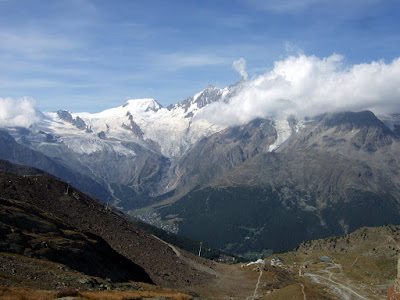 From above Kreuzboden the distant village of Saas Fee comes into view below the snowy Alphubel and the clouded Mishchabel peaks. The towers on the left hand slope are the line of the Hohsaas cableway which is useful in descent. 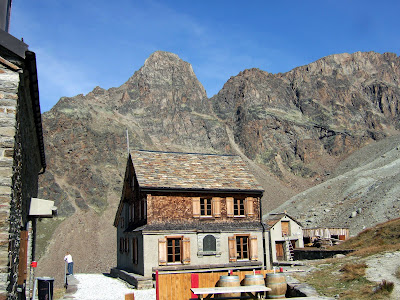 The Weissmies Hut at 2726m is reached by a final; steep section of path though there is no difficulty getting here. The rock peak is the Jagihorn (3206m) and is popular with climbers. 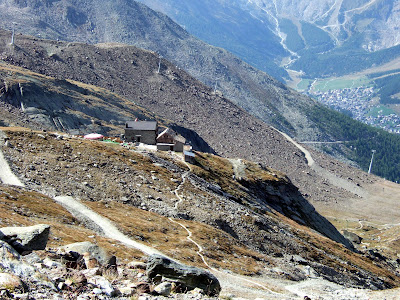 The path ascends the stony slopes behind the hut to reach a rocky cwm beneath the Lagginhorn and Fletschhorn where it turns steeply right to climb to a high bleak looking valley where the Hohsaas top station comes into view ahead. The path is easy to follow all the way and the first sign of civilisation reached above this valley is the Berghutte Hohsaas or Hohsaas Hut at 3101m with the gondola station just beyond. If the hut is closed refreshments are available by the station. 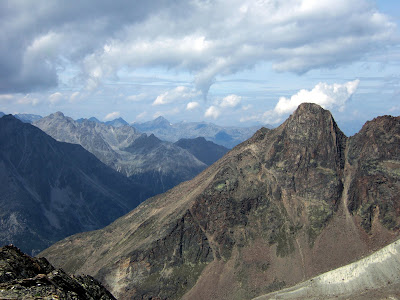 The Jagihorn and the sea of peaks to the North West from near Berghutte Hohsaas. 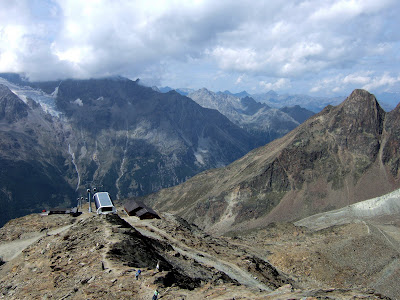 The Hohsaas Rundweg is a fairly new high altitude circular trail leading over the mountainside above the Hohsaas station which is here seen below. The path is again well marked and passes several carved stones which are each dedicated to the 4000m peaks visible from here (weather permitting). You will encounter more people on this short section as many walk the route from the cable car and if you have walked all the way - be smug. 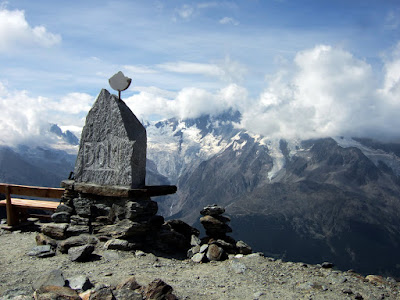 The highest point of the trail at 3330m or almost 11000 feet is fittingly marked with the stone representing the Dom - at 4545m the highest Swiss peak not shared with the Italians. It is in the cloud opposite and I didn't actually see it despite this being one of the best days weather wise! 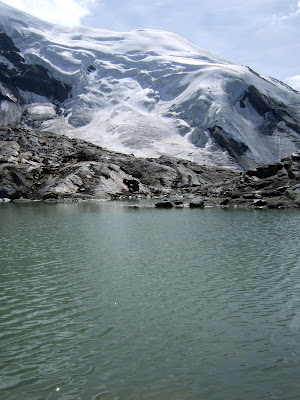 Just beyond the high point of the Rundweg the trail passes a small tarn in a rocky hollow and begins its descent back round to Hohsaas. The Weissmies (4023m) and the Triftgletscher or Trift Glacier are most impressive from here. 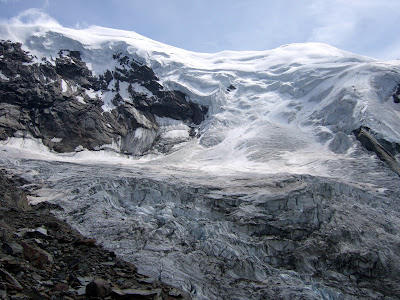 After a rough but easy descent the path joins a wide and level track back to Hohsaas. The views of the glacier are quite spectacular. You can return on the gondola or walk back down to Kreuzboden.
Pete Buckley Jan 2011
Posted by Pete Buckley at 06:12